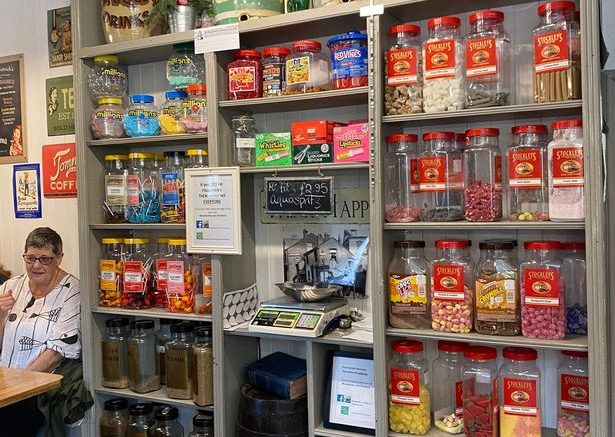 While the concept of a bar which doesn’t serve booze might seem strange in today’s society during the 19th and early 20th centuries they were a common sight on high streets in the north of England.

Their purpose was to support the temperance movement – social activism against the consumption of alcohol which led to prohibition in countries including the USA and Canada.

Now, as the idea of a bar is automatically associated with alcohol, temperance bars are few and far between but there is one left in England – and it’s in Lancashire.

Fitzpatrick’s in Rawtenstall opened in 1890 and is still going strong today.

The small bar has around eight tables outside and five inside and Fitzpatrick’s is so popular that tables are occasionally reserved in advance.

I visited Fitzpatrick’s, at the end of Rawtenstall’s traditional high street, with my six-year-old daughter Abigail whose face froze in delight as she perused the menu complete with images of the most tempting milkshakes you could ever wish to see.

From the Magical Mermaid (bubblegum milkshake with strawberry sauce topped with a sprinkled donut and a mermaid fin) to the Jammie Bugger (a blood tonic milkshake with a waffle on top, raspberry ripple ice cream, raspberry sauce, Jammie dodgers and white chocolate jazzles) there really is something for everyone.

Then of course there are all the nostalgic drinks which will take those of a certain age and above back to their childhoods.

You can choose from Dandelion and Burdock, Sarsaparilla, ginger beer and cream soda or opt for one of the fruit drinks featuring gooseberry and elderflower, lime and lemongrass or sour cherry, red grape and hibiscus.

I ordered a Dandelion and Burdock and was then presented with even more choice – did I want it hot or cold? Fizzy or still? Or aqua spritz (with frozen raspberries and blueberries)?

I went for the aqua spritz (£3.45) while Abigail, unsurprisingly, chose a £3.95 Unicorn Fluff (strawberry milkshake topped with mini marshmallows, 100s and 1,000s and candy floss).

But of course the temptations on offer at Fitzpatrick’s don’t stop at beverages – they also have a decent-sized menu featuring hot and cold food.

My eyes were instantly drawn to the ‘Lancashire Grub’ section which included cottage pie, Lancashire hotpot and stew and dumplings (all £6.95 each). I was sorely tempted to go for the hotpot (after all this is LancsLive) but my appetite just wasn’t up to it so I went for a cheese and ham toastie (£4.95) which came served with crisps and a side salad.

Abigail, despite my suspicion the milkshake would sufficiently fill her small tummy, insisted on having something to eat so she chose a kid’s half ham sandwich and crisps (£2.25).

The two waitresses working at Fitzpatrick’s were rushed off their feet, understandably given the bar’s popularity, and were incredibly polite in explaining there would be a 10 to 15 minute wait which, of course, was completely worth it.

The eyes of every customer lit up each time the waitress appeared with a tray of mouth-watering milkshakes, hoping it would be theirs. And finally, after 10 minutes or so, ours did.

A big lover of candy floss and marshmallows, Abigail tucked straight in, even scooping the excess cream onto a side plate to reach the goodies lurking underneath.

My Dandelion and Burdock was delightfully refreshing – and not overly strong as you often find with canned varieties. The ham in our sandwiches was thick and juicy while the cheese used in my toastie was clearly a good quality cheddar.

We both thoroughly enjoyed our visit to Fitzpatrick’s and would highly recommend anyone take a trip there for a treat.

The concept of a non-alcoholic bar might have fizzled out generally but, for Fitzpatrick’s at least, this is one temperance bar which is here to stay.

Piccolino to close Clitheroe restaurant and two others in north west