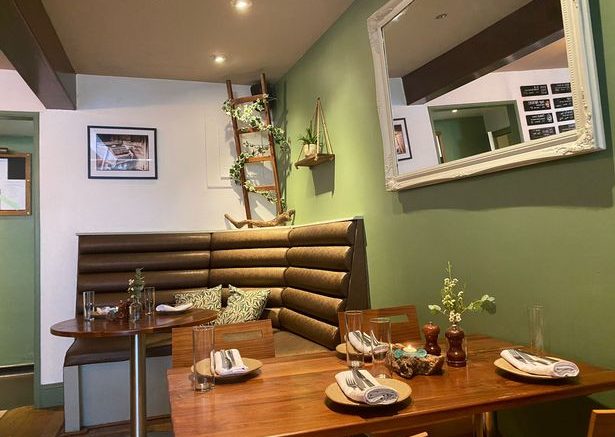 An eaterie in Lancaster has recently earned its place in a list of the top 15 best independent restaurants in the UK.

Sitting alongside eateries in London, Edinburgh and Sheffield, The Quarterhouse in Lancaster is up there with the best of the best, if Trip Advisor reviews are anything to go by.

Based in the city’s Canal Quarter, the independent, chef-owned kitchen and bar use ‘some of the UK’s best local produce’ which they celebrate in their seasonal menus.

The chefs, Alan and James, are both Lancashire natives and developed their expertise throughout the county and Cumbria respectively.

Alan’s approach to food is said to ‘”always been inspired by his love of travel and his native county of Lancashire,” whilst James’ “expertly balances local, seasonal produce with the modern, international food trends” in his cuisine.

After their feat of making it into the top 15 best independent eateries, according to new research from CoffeeFriend.co.uk, and with a 93% ‘excellent’ rating and only one ‘terrible’ review on Trip Advisor, Lancs Live headed down to The Quarterhouse to see what all the hype was about.

The Quarterhouse serves brunch, an early bird menu and an evening meal throughout the day.

The early bird offer, served from 5pm until 6pm Wednesday to Saturday consists of one nibble and two small plates for only £12.

Outside of the early evening offer, nibbles cost either £3 or £4 and small plates range from £5 to £16.

The Quarterhouse also serve platters and large plates. The cheeseboard, made up of your choice of local cheeses costs £11 for three cheeses and £14 for five.

On the higher end of the menu, the Seafood Celebration platter that serves a minimum of two people and must be pre-ordered when you book is priced at £45 and consists of dressed lobster, dressed crab, crevettes, smoked prawns, smoked salmon, smoked mackerel, peppered mackerel, two oysters, pickled cockles, lemon jam, aioli and freshly baked brioche. We remain desperate to see someone take this on in a man vs food showdown.

In order to try as much as we could, we decided to take advantage of the early bird offer and settled in to our reservation excited to see what was on offer.

Inside, The Quarterhouse is both friendly and sleek. As it dims into the evening, its tame green tones and the artisanal driftwood produce a friendly aspect to fine dining which is great in itself. The restaurant takes away this idea that fine dining is exclusive to a particular kind of diner – it isn’t – and the Quarterhouse’s range definitely reflects that.

For nibbles, we opted for the artisan bread and salsa verde, as well as the marinated olives. This decision, which may not sound the most exciting, was impeccable.

From the get-go, it was obvious that the food genuinely had a lot of care and attention behind it. The sourdough was warm and the olives were succulent and moreish.

The Quarterhouse brought a lot of new flavours to my palette, and whilst some were a little extraordinary for my taste buds to comprehend, it was evident why the restaurant had been rated so highly.

Our small plates consisted of a seared swordfish dish, a warm winter salad, sauteed wild mushrooms and roasted Maris Piper. All the dishes were totally different and each came with their own strengths.

Having never had the opportunity to try swordfish before, the small plate meant it could be tried without the commitment, and it was great. Whilst we personally didn’t take to the polenta galette included on the sauteed wild mushrooms dish, the shallots and the shrooms were soft and full of flavour. And as for Violetta potatoes, included on the roasted Maris Piper plate, well, we’re stunned that we exist in a world where not everyone talks about the existence of purple potatoes.

The service was incredible. We were given tasters of any beer we were interested in trying before having to order a full pint, and the staff were incredibly attentive, asking how our meals were and clearing the tables promptly.

For us, the highlight was in the dessert menu. We always thought we were starter over dessert people, at least until we tried The Quarterhouse’s damson parfait, crumble and toasted meringue.

The dessert, served in what felt like the perfect after-dinner amount, genuinely seemed to evaporate in my mouth. It was sweet but not sickly, and the Damson provided a rich fruit flavour that formed some kind of holy communion with the crumble.

If you’re wondering whether a trip to one of the UK’s best independent eateries is worth your time, don’t even hesitate to get down to The Quarterhouse.

Just make sure you book in advance to avoid disappointment.