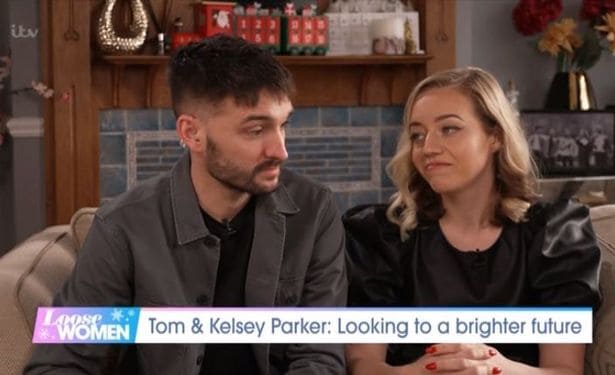 The Wanted singer Tom Parker and his family have been forced through a rollercoaster since he announced last October that he had been diagnosed with an inoperable grade 4 glioblastoma.

Tom’s brain cancer diagnosis, which sent the showbiz world into shock, was quickly followed by a handful of seizures before treatment had begun.

Tom told audiences his cancer has now been categorised as “stable”.

“I mean, it’s pretty unheard of,” the 33-year-old told ITV panellists Kaye Adams, Nadia Sawahla, Linda Robson and Katie Piper. “To get to that point – just really over the moon to be honest with you.

Kelsey, who was 35-weeks pregnant with Tom’s second child when he received the devastating diagnosis, added: “I just think, with having this, that you always worry about the scans – big ‘scanxiety’ – and then when we got the news, obviously we were elated!

“We were just so happy!”

Since his diagnosis, Tom has endured multiple rounds of chemotherapy but has now admitted to feeling a lot healthier.

In September this year, he hosted a special charity concert at The Royal Albert Hall in aid of Channel 4’s Stand Up to Cancer charity program.

The event, called ‘Inside My Head’, was headlined by chart-topping artists such as Becky Hill, McFly, Liam Payne and even featured a special performance from Tom and his fellow The Wanted band-mates (Max George, Siva Kaneswaran, Jay McGuiness, and Nathan Sykes), who sang together for the first time since they announced their hiatus in 2014.

Tom and Kelsey, who have kept concerned fans constantly in the loop with Tom’s well-being, have been using the hashtag ‘#PositiveParkers’ to promote the need to look on the bright side of what might appear as dooming circumstances.

“That’s how we’ve got through this whole situation,” Kelsey admitted. “Through positivity, like it’s really, massively helped us.”

Tom added: “I genuinely do believe in, what you put out to the universe, is what you get back.”

He and his wife explained that they are now campaigning for the NHS to adopt newer and more diverse treatments of cancer.

“All cancers are different,” Tom continued. “But the NHS currently treat all cancers pretty much with the same treatment, which is chemotherapy and radiotherapy.

“Don’t get me wrong, we’re fortunate enough to be able to at least have chemotherapy and radiotherapy, but there is better technology and treatment out there now, so I would like to advocate for better treatment.”

“And make a change,” Kelsey added.