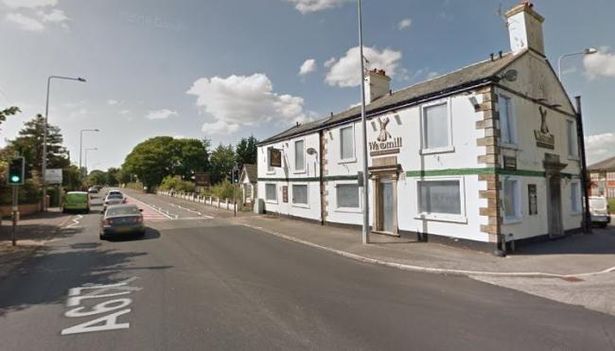 An abandoned pub previously used for pornography shoots finally looks set to be levelled as part of longstanding plans for the site.

The Windmill Hotel on the A677 Preston New Road, near Mellor Brook, is being demolished as part of longstanding desires to build a filling station and 24-hour convenience store on the site.

Since the pub itself shut down in 2014, residents reported concerns that the former watering hole was being used as a venue to film pornographic movies.

This was after they had seen lights on in the venue while it was shut.

Since 2016, residents had fought against the petrol station masterplan, brought forward by James Hall & Co Ltd, arguing it was a site that lend itself well to affordable housing.

In 2018, the Samlesbury Residents Forum and Mellor Brook Matters Group successfully fought off the development, with the Planning Inspectorate dismissing an appeal from James Hall & Co Ltd.

Scaled down, revised plans for the development were then re-lodged in 2020, with more than 270 locals coming out against the plan with just 34 saying they supported the project.

Images of what the site could look like shows a Spar shop and Texaco filling station where the pub currently stands.

And now, that plan finally looks set for the green light after planning officers at South Ribble Borough Council gave it an initial thumbs up.

In notes to councillors, officer Catherine Lewis says: “With regard to this application it is acknowledged that there would be some weight to the economic and social benefits.

“In terms of the environmental aspects, a number of trees have previously been felled and therefore any biodiversity increase would have a neutral effect.

“The original plans for this application relocated the building to the location of the Public House.

“The revised plans submitted in June 2021 in terms of a slightly smaller design with materials that are more in keeping with the Mellor Brook, and the opportunity to provide additional planting to Branch Road, on balance outweigh refusing the application on the grounds of the development being out of character of the village.”

The final call on the demolition and construction plans will be taken by the council’s planning committee on Thursday (July 29).

'Given the profits you lot make it’s pathetic that you are charging for this. Won't buy fuel there again'
Lancs Live – What’s On …

Here's all you need to know, and what to do
Lancs Live – What’s On …