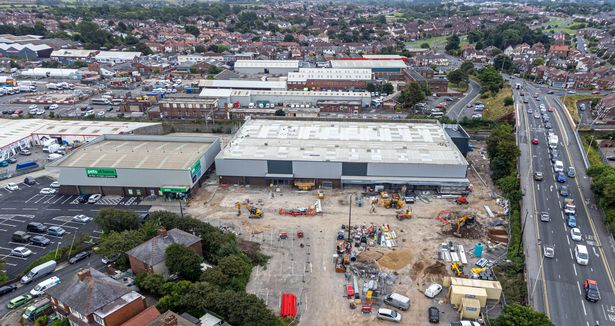 Discount shop giant B&M has confirmed it is opening up a new store in the Lancashire town it was founded in.

The large company has revealed it is set to open a new store in Blackpool in 2021 as part of the company’s expansion plans for a post-Covid world.

B&M is set to open the store in the former Poundstretcher superstore off Holyoake Avenue, Bispham.

READ MORE: Blackpool ‘best of the best’ restaurant found out about TripAdvisor award from friends

The store has been divided in half, with B&M set to take over the eastern unit while Aldi is setting up shop in an expanded western wing.

Documents submitted to Blackpool Council show totem sign designs for the site, with an Aldi logo at the top followed by B&M and a sign for the existing Pets at Home store.

Blueprints for the store detail it being 1,780 square metres in size with signage on the southern entrance and north west corners of the building. B&M has yet to apply to the council’s planning department over its signage specifics.

Very little further detail has been released at this stage, with B&M confirming the store is pencilled in to open in a ‘few months’ time.

Aerial photos of the site, taken by LancsLive and The BPL Bible today (August 11), show construction work ongoing for both B&M and Aldi with machinery and equipment across the car park.

The car park will have a total of 227 spaces including 14 disabled bays and nine parent and child spots.

In a very brief statement, a B&M spokesperson told LancsLive: “We can confirm there will be a new store.

“However, we don’t have any further information as of yet as the opening date isn’t for a few months.”

B&M opened its first store in Blackpool in 1978 before being sold to Simon and Bobby Arora in December 2004 from Phildrew Investments.

At the time, the company has 21 stores.

Now it boasts 600 across the United Kingdom.